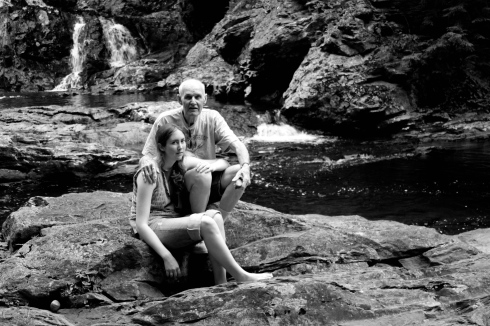 Me and Grampa, about 6 months before he died.

My grandfather wanted to be a cowboy, like he saw in the old Western films. In some ways he was almost there: he was ornery, had a southern drawl, and the kind of stupid courage that makes people speak loudly about things they don’t understand. He was a writer and a musician in his spare time, and is a major source of inspiration for me in both of these pursuits. He is also the reason I came to New Mexico.

It is sometimes hard to drive through the regal landscapes of New Mexico without feeling like I’m in one of his Western movies. Dynamic rapid sky, impartial reclining mountains with their jagged elbows, and tufted-roadside-desert grasses have been known to take me entirely out of myself.

Especially when I have the right song on.

My grandfather also had a flair for the dramatic. So I know he’ll get me when I say that my coming to New Mexico felt like fulfilling his lost dream. It seems to make sense in a grand story arc between his life and mine. Almost cinematic. And as my road trip will be starting soon, I wonder what kind of movie it would make. Adventure? Romantic comedy? Avant-garde experimental piece? Family film? (Probably.) Thriller? (I hope not.)

What is your favorite soundtrack for the car? What makes you feel like you’re not only going somewhere, but you’re having an epic time doing it?