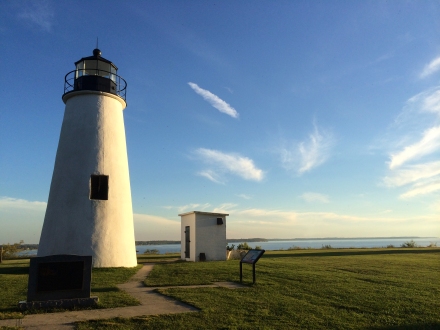 I only camped four nights during this month-long trip: once in the Arkansas Hot Springs National Park, once along the Blue Ridge Parkway outside of Asheville, and two nights in Elk Neck State Park in Maryland. By and large these were uneventful, peaceful sojourns.

Camping in Maryland was the exception.

First of all, it was $27 a night for off-season camping. $27. A night. Yep. Secondly, you were required to camp on their tent pads, but the tent pads had such hard-packed dirt/gravel that I spent twenty minutes and bent four stakes when I tried to stake down with a hammer in preparation for the oncoming storm.

Then there was the storm. The afternoon of my first day in the park, the weather prediction was 30% chance of rain in the early evening. I thought, okay, no big deal. A little rain never hurt anyone. I staked down my tent as best I could and went to sleep.

At 2 a.m. I woke up thinking I was about to take a ride on Noah’s arc. In one corner of the tent, the vinyl bottom was floating up from the ground – I couldn’t tell whether from wind or water. I pushed it down several times with my hand like you might test a waterbed and got similar results. I stuck my hand outside the tent. It was just wind. 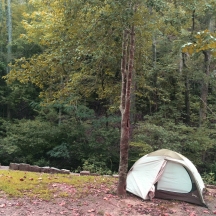 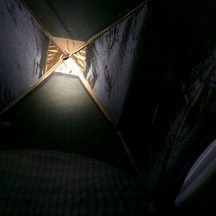 Scenic view from the inside.

It was a noisy night. OnceI realized sleep was out of the question, I made excellent progress on the sock I was knitting.

By morning it was still gusting and blowing. I figured that packing up camp at 7 a.m. in the rain wasn’t any different from packing up camp at 1 p.m., so I spent an hour wrestling my tent, pad, sleeping bag and various items into my car. A ranger drove by three separate times, windows warmly sealed up against the now-horizontal rain. I could have thrown a bent tent stake at them. You’re enjoying watching this, aren’t you, you dry person you?

Gear in trunk, I drove to the camp exit and took advantage of the overhang at the registration center to rearrange some of my gear out of the driving rain. A ranger came up to the window. I thought, oh, that’s nice, she wants to see how I did in the storm. I rolled down my window.

“Hi there, I was just using your overhang to repack some of my gear out of the rain. I stayed over the past two nights.”

I stared at her. There were two occupied sites in the whole place. And she was telling me I stole her $27 camping?

“No ma’am, I was in site 168. See, I have both nights’ receipts right here.” I held out the two large, manila hangers with the numbers “168” written right below today and yesterday’s dates.

She pursed her lips at me. I wished I had a tent stake again. 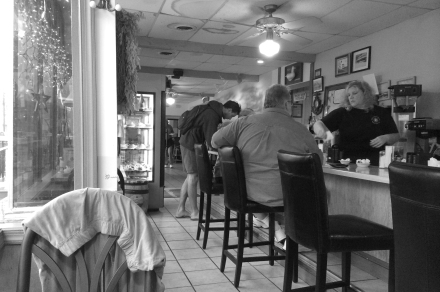 Drying myself out at a diner after a wet night in Elk Neck State Park, MD.

One of us got our numbers mixed up. I’ll go ahead and say it was probably me. But I was so mad that the rangers had offered zero help during the storm, zero interest in saying hello to one of the three campers they had in the whole park, and now, sitting in my car absolutely soaked to the bone, with my two receipts for some equivalent but one-digit-off camp site – I lost all patience. And I drove away.

So, ladies, beware – the dangers of camping alone lie not in aggressive strangers but in bored and vindictive park rangers. Let it be known. 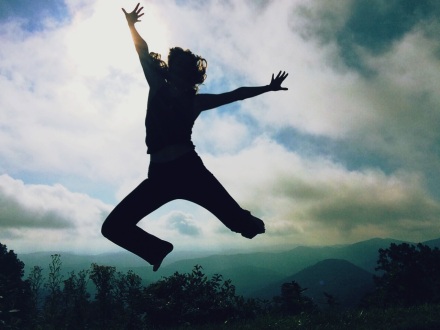 Morning joy and dance in the Blue Ridge Mountains

Yesterday I put my feet in the ocean for the first time in over a year. Technically it was the Potomac river, but it had sand and seashells and strong waves and felt like the ocean except for the fact that you could see land on the other side of the water.

A few days ago while camping in the Blue Ridge Mountains, I encountered a fog so thick I had to stop driving.

When I go to bed every night, my sheets feel damp and the pages of my book are clammy. 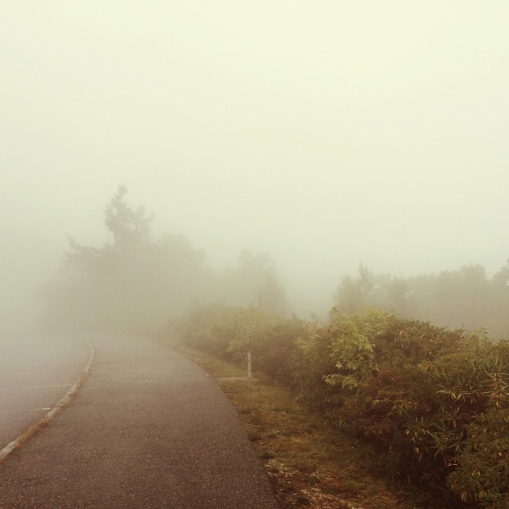 Mist in the Blue Ridge Mountains

In short, water is everywhere. I keep warily eyeing the trees and ponds and rivers that I see now on a daily basis. I don’t trust them. I half expect them to disappear. I suppose after four years in the desert, I can’t quite let myself believe that I am really back in the forests to stay. That no one is going to make me leave.

That I may once again think that it is unremarkable to be surrounded by green things.

Your responses have been amazing. One week and two posts deep, and I’m already finding myself filling in the map of my future travels with people to meet, places to stay, and dances to call at. I had hoped this would happen, but it is another thing entirely to see one’s vision start to materialize.

I’m filling in the dots on the map. And I hope it keeps filling. I’m already overflowing to know that there is such generosity in the extended networks of the communities I am a part of.

Thank you. I am grateful.